This is something new for The Heliopaths as we would usually be going on DIY trips to make the most out of our time and be competitive in spending the lowest amount possible. But this time, we got a tour package instead. However since we found a fairly priced package with good inclusions (travel insurance) we opted to get the package from Aling Maliit Adventure PH which was a good call since we didn’t have to think about things such as transportation, where to stay etc. Tita/tito mode to the max. 😛

The travel to Buscalan was long and rough. BUT we (or at least me lol) were able to sleep throughout the trip. We only alighted the van for a stopover in Tarlac for a tire change and quick CR trip, and went straight ahead as our tour coordinator Hanna wanted to get us there as early as possible. This was a good thing as the line to get a tattoo tends to get long at most times and there are even moments when groups had to wait days to get a tattoo from the famous Apo Whang-od.

After a pain-staking 9 hour, zig-zaggy drive, we arrived at the drop off point where we had to continue the journey on foot, which included the area where the minor landslide occurred. I know, you’re probably thinking “yikes! Walking through a landslide???? That’s crazy!”  Oddly enough, when we saw locals walking through the landslide (even saw a local with just slippers on, walking casually with an umbrella over her head ), we were encouraged to go through, though Hanna and our local guide Letty made sure it was safe before we did.

I have to admit, I did not expect the way to the village to be that tough on foot. We had to go across a valley which was laid out with stone-like stairs. The descent to the valley wasn’t bad, but the ascent—- let’s just say I was glad I didn’t pass out. It took us an hour before we made it to the local registration booth which was around 7am. Not for long, we were told to go to one house to eat our breakfast paired with our dear weird friend Ivan’s highlight, Buscalan coffee, which I would have to say is pretty addictive as I bought two packs for 100php each. lol

After a hearty meal atop the Buscalan landscape with rice fields below, we were advised to freshen up quickly and to line up for our batok sessions. Hanna advised that coordinators were not allowed to accompany their tourists to the line due to conflicts in queueing up as others sometimes do cutsies. But fortunately for us, we were the only ones lined up to get tattoos, probably due to other groups not pushing through with their trip what with the horrors of the typhoon just days before. 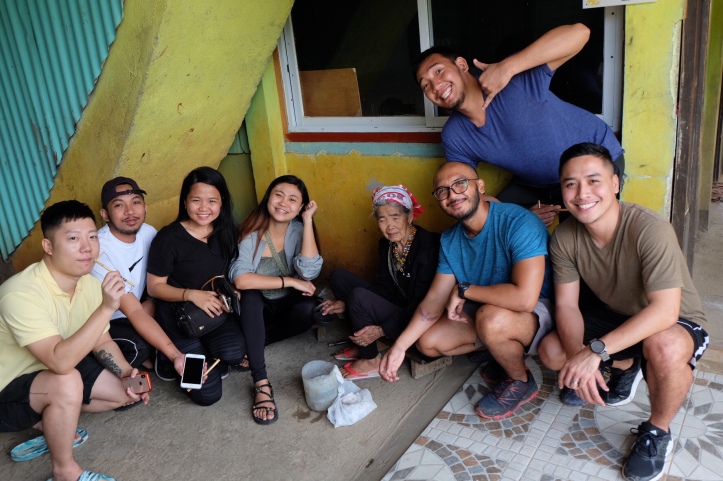 When we got there, Apo was just sitting by a very narrow eskinita, squatting in her work posture to start with her routine of “pagbabatok”. Buscalan was a fairly small barangay situated on a valley in Kalinga. With just having electricity, still with no phone service (unless you have your first edition 3310), the place is only now starting to be uplifted from ingenuous means of living.

Me, Louie and Jon were the first ones to go to Apo as some of us were still getting ready back at our home-stay. When we got there, Apo was just finishing up her signature batok (three dots) with three dudes that were from a tour group the day before as they met the cut off then. Once done, and since nobody was around, she advised our local tour guide in their native dialect that she can do our tattoo designs for us, which was not usually the case as she would usually only do her signature three dots.

Being the bear grillz of the group, Jon stepped up to get his first ever tattoo by the Famous Apo Whang-od. I opted to have my complicated design done by grace (Apo’s grand-daughter apprentice) and just get Apo’s  three dot signature. When you get your batok from Apo, be sure to have iron pressed money to pay her with, folded in a neat way as Apo gets irritated when the money you hand her with is all crumpled up.

I could see the effort to composure in Jon’s eyes as Apo was working on his tattoo. After he had his, I then went to get the signature done with mine before the actual batok design. With an extreme fear of injections, I braced myself as she was prepping to do the batok on my wrist. Surprisingly, the pain was somewhat tolerable but you can definitely feel the thorn sticking constantly to your skin with every tap.

After my three dot signature, I then went to grace to get my tattoo design. I chose a combination of snake tongue and snake skin which, for them, symbolizes strength, protection, and health but I interpret as flexibility (and I chose it because I think it looks cool lol). Though by the time I went in line, Grace advised she’d do the easy designs first and the more complicated ones (which was mine *so sad*) after lunch.

So after everyone from my group got theirs, we went back to our homestay (which I’ll describe later) to have lunch. I really appreciate home cooked meals whenever we go on trips such as this. It makes the experience 10 times better.

After lunch, I went back at Grace’s tattoo spot which had a view of the valley. It took her at most an hour to finish my chosen design. The sound that the tapping of the thorn makes was so hypnotizing which somehow tends to alleviate the pain that you feel, with your skin being pricked and all. Tattoo pricing depends on the size and complexity of the design. Mine cost 1650 which includes grace’s main tattoo design (1500), Apo’s Signature (100) and a picture with her (50). Talk about local celebrity feels.

By the way, in case you didn’t know, the usual photo we see of apo laying her hands on a tourist’s private parts is actually a gesture of blessing as she has no children of her own. This is her means to pass on something that she should’ve had, given that she had the option to marry. Hanna spoke of her story; that she had 18 lovers but none of them were able to succeed in getting her hand in marriage. She was only able to fall for one man out of the 18. However, due to tribal conflicts, they were forbidden to be wed. That’s your Filipino version of Romeo and Juliet. So next time you see her photos, please look at it with an open mind and not to judge it or make fun of it. And if you happen to get that photo taken when you visit, make sure you have the decency to respect this act of her culture, otherwise, just pose beside her and do the korean oppa heart :P.

The Accommodation, travel agency and the Buscalan Experience

I was glad that my friends were there to support me though I took long in getting my tattoo done (even if they were very vocal about how long it was lol). After this, we went back to our home stay to get a quick rest (siesta for the titas and titos). We were a total of 12 who stayed in the house. We occupied the second floor which was split in two divisions; a slightly open, terrace-like “air-cool” room, and another inner room with two small windows. 7 of us stayed inside and the other 5 opted to occupy the more open area. If you plan to go to Buscalan, be advised that the only option would be home-stay.

As I’ve previously mentioned, Buscalan is a small unpretending village so be prepared to kick it, as basic as it is. In addition, be sure to get your guide prior the trip as it is required to get someone local to fix your Accommodation/meals and watch over you during your stay. We would personally recommend Hanna (information below) as she was so awesome in assisting us all throughout (unli Bonamin pa more).

After our short rest, we asked for coffee, which I have yet to mention was unlimited and would be provided when asked (love it!). Then we freshened up before we set off to go to the village proper. By the way, be sure to have the wits to take the coldest bath ever as the water is extremely cold, colder than your love life (well, okay, my love life… for now ;p).

We started to trail up along narrow alleys and passages to the Village basketball court. Along the way, local swine and poultry were free to roam around and one huge hog even surprised us by climbing up a fence. Talk about lean meat!

There was an event on going when we arrived. The locals were gathered to celebrate the birthday of a baby which was, in their culture, celebrated every 6 months.

We were welcomed with the locals dancing to the sound of gongs as they celebrated cheerfully. It was not as grandiose as one would think, but the locals gathering together to celebrate the life of probably their youngest populous was so uplifting to see.

After this, we headed back to the home stay where they cooked sinigang in their own local way which was also one of the local pigs that they have as livestock. It was different as they only use what was near them and not as “artificial” as one would have it done in Manila. After this we then had socials and called it a night at around 11pm.

The following day, we woke up to the sound of the bustling winds and the cool breeze of dawn. Just as our hosts prepared the food, we decided to go back to through court area to get to the rice fields to have our photo op just in time for the perfect lighting that the morning sunrise brings. We had some cool photos thanks to our pro-photographer Ivan and Jon. The landscape in Buscalan was just dreamy though we were not able to catch the rice fields in its full bloom as they have just harvested the grains.

We then went back at our homestay for breakfast and then prepared for the descent back to Manila. Before we headed out, we had our last memorabilia by getting matching wave batoks as a sign of friendship and a homage to having the same passion for travelling. Even though the trip back was as exhausting as it was going there, I can definitely say that this was one for the books with experiencing the bonds of friendship, grown tighter by the pain we endured all the same in submerging into the cultural art of the Mangbabatoks. 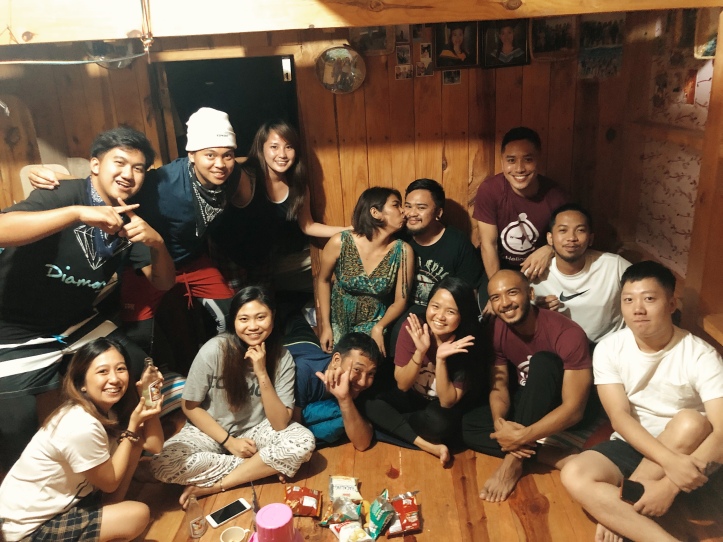 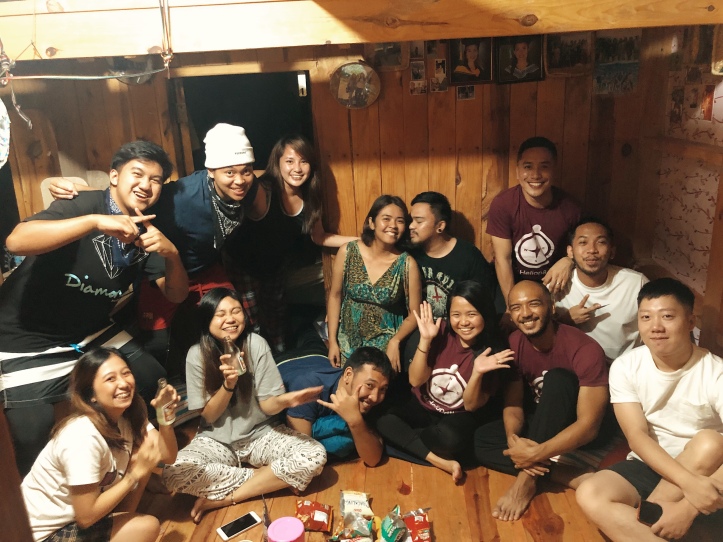 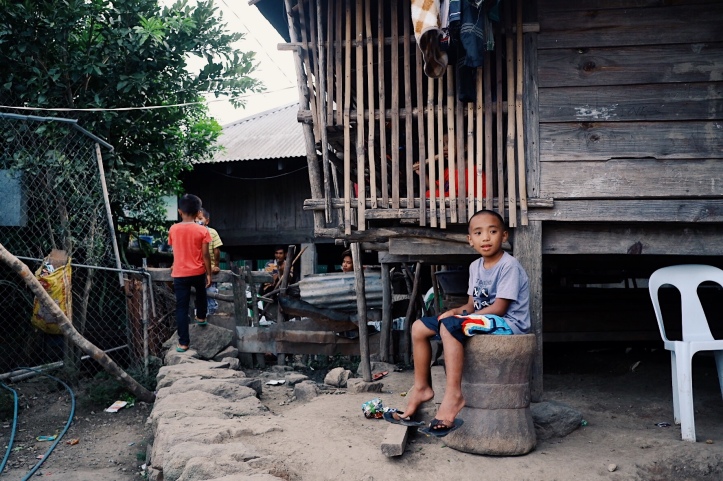 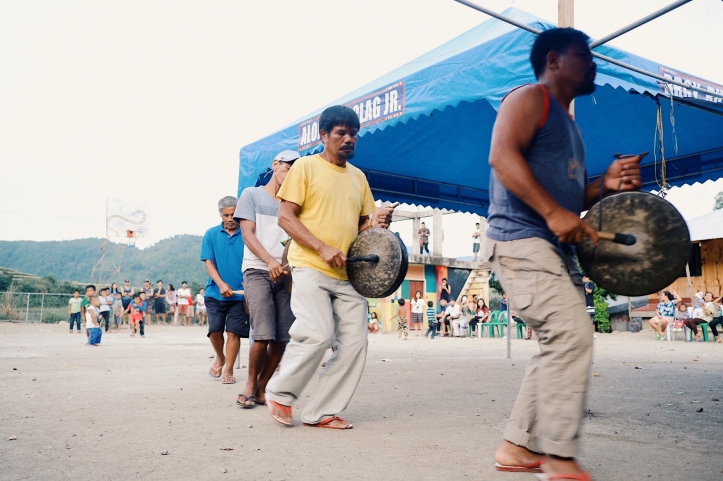 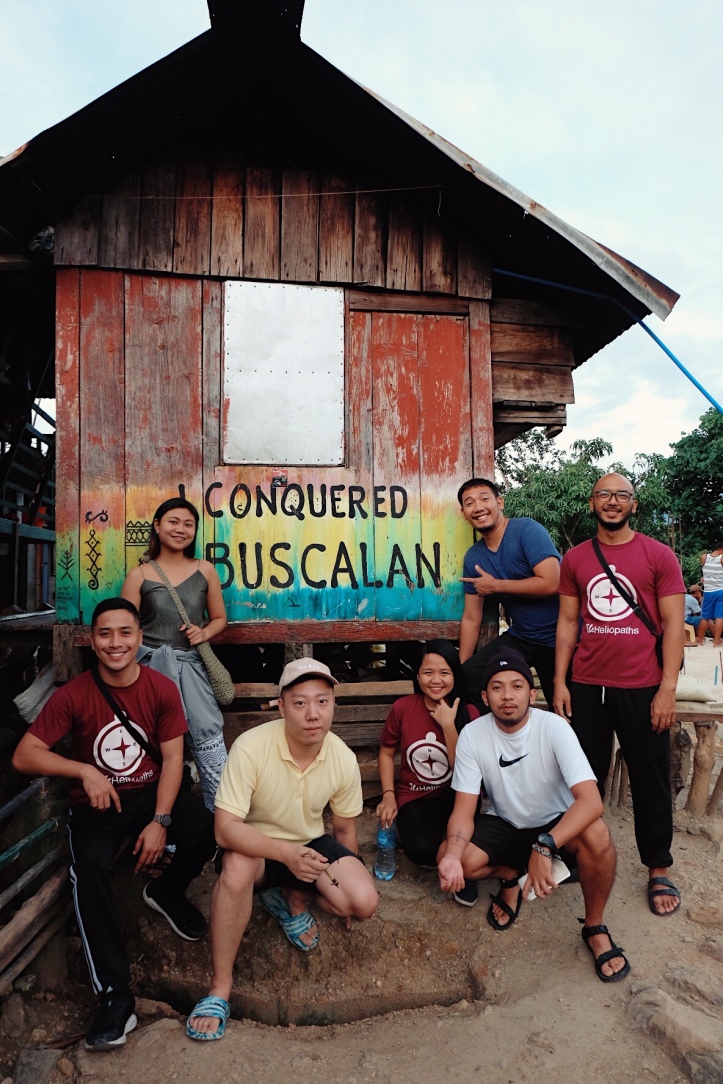 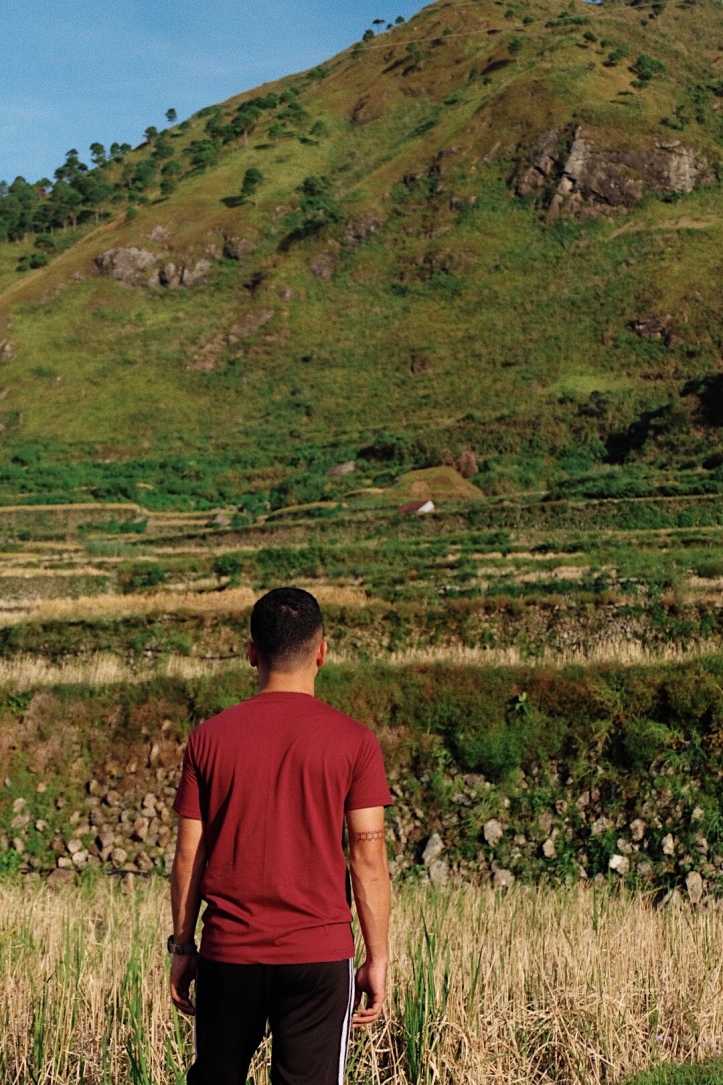 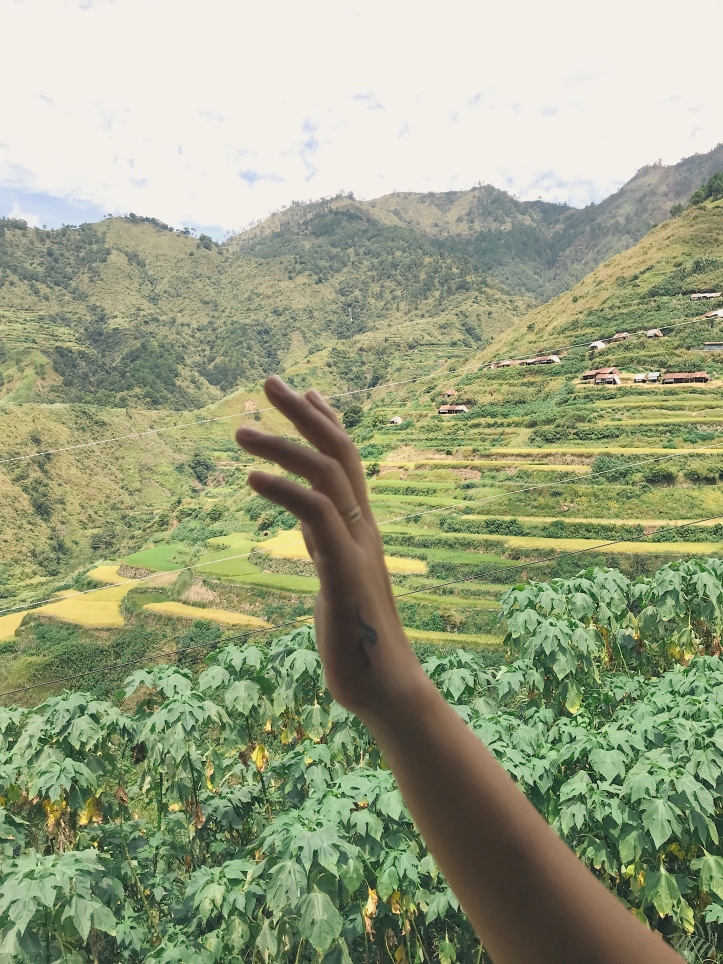